Most Popular Traditional Folk Music and Dance of Rajasthan

One of the most popular folk dances in India is Ghoomar in which the women perform gracious movements, spinning around, swirling around their attire and swaying their hand in exuberance of the purpose of the event. It was initially performed by Bhil tribe, but later it has become famous among the royal communities. Ghoomar is widely famous in festivals and special events such as Holi, Teej, arrival of bride to her groom’s house. Wearing the long traditional outfit, women cover their face with a veil and perform the dance to make the event lively and entertaining. With the upbeat songs and coordinated movements women perform Ghoomar to fill the place with happy vibes around.

Bhavai dance is famous for its ritualistic aesthetics, and it takes years of practice to get trained. It is not that easy to perform like other dance forms. As Bhavai has the ritualistic value the performers practice it with high form of devotion. This dance belongs to Klabelia, Bhil, Meena and Jat tribes of the state. In this dance, women balance earthen pots or brass pitchers on their head. They twirl with their feet but not on the ordinary surface but on a brass plate. They balance the stack of pots on their head and twirl within the plate which is really difficult and needs strenuous practice. Sometimes they perform this dance on the glass which would be thrilling to watch. When women perform this dance, men would accompany them with music, playing instruments and singing. They play the traditional instruments like Dholak, Harmonium and Sarangi. 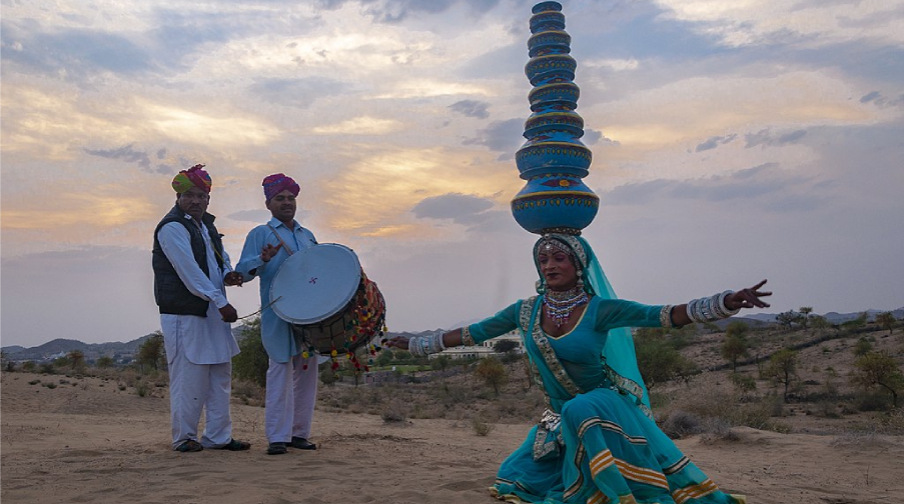 Also called as Snake Charmer dance, Kalbelia is one of the most famous traditional folk dance of Rajasthan considered as Intangible Heritage by UNESCO. Women dressed in their traditional costume perform sinuous movements which is the highlight of this dance. Unlike other dance forms there is no fast beat movements as this dance form completely about movements that captivates the heart. People call this dance as Sapera which also means Snake charmer dance in which the graceful movements of the women would be pleasing to watch. Their black attire, the sensual movements with accompanying music makes the dance awesome to enjoy. Kalbelia is famous in events and festivals especially during nighttime events it would be enjoyable to watch such a graceful dance. 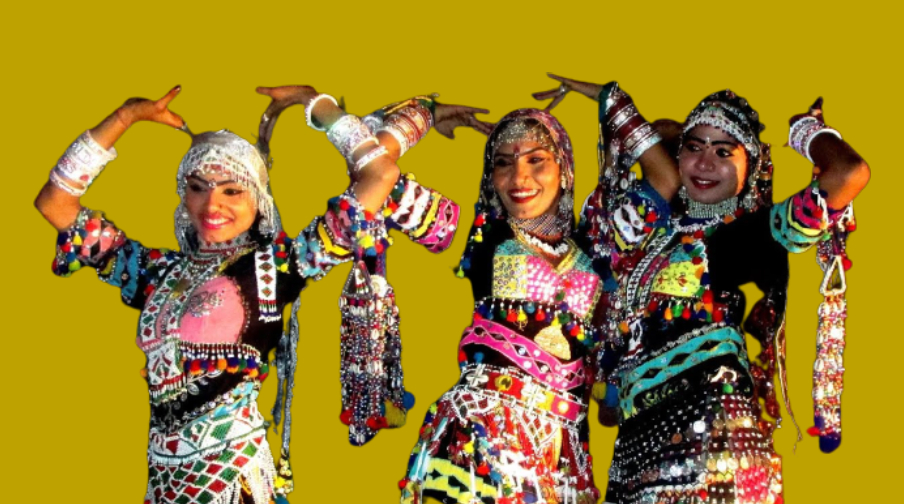 Chari is a joyful dance performed in various events like wedding ceremony, birth of a male child and different festivals of the state. Chari means pot, through this dance the performers symbolize water fetching ritual. It is like portraying the ritual to wish the blessings on the community. The birth of a male child brings a great joy to the family which will be relished with Chari dance. Women in ethnic attire balance a pot and a lighted lamp in the pot on their head. With smile on their face and vigor in their dance movements for the accompanying music played by the men women perform like there is no tomorrow and make the ambience energetic and entertained. 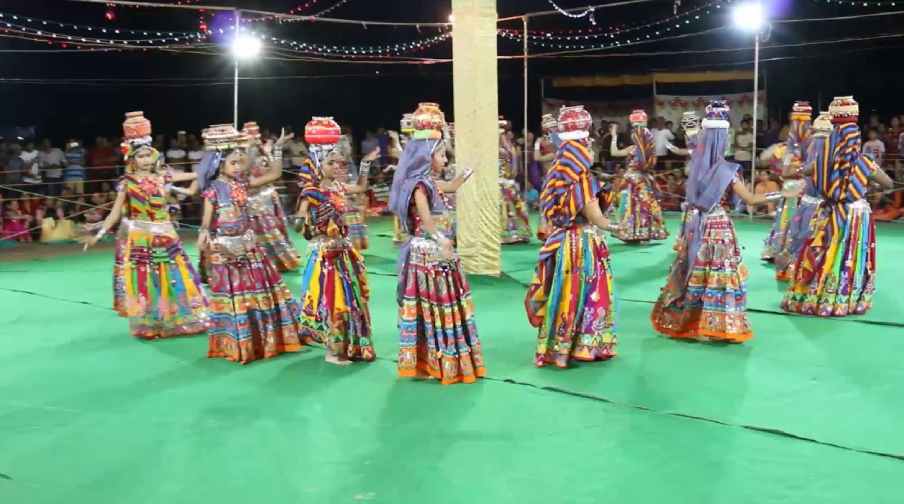 Widely performed in festivals and wedding ceremonies, Kacchi Ghodi is one of the oldest traditional folk dance in Rajasthan. The idea of this dance is to showcase the tales of the bandits living in the local region. Men attired in traditional costumes would perform on a dummy horse. It was started in the Shekhawati region where men dressed in Kurta, turbans and Dhotis ride on the puppet horse accompanied by flute and percussion music. The tales of the bandit will be shown as a brave fight using mock swords. Kachhi Ghodi is to portray the bravery of the bandits.

Gair is a popular folk dance of Rajasthan, one of the major dance forms of Bhil community. This is also a dance form that includes both men and women. They dance together by forming a circle in which men hold sticks in their hand making a rhythm using it when they swirl in a pattern. Men and Women wear attractive attire which is specially used for the dance and use arrow, sticks and sword to perform this dance form. Performers hit the sticks for the rhythm played using musical instruments by traditional musicians. They hit the sticks in a pattern when they dance and swirl. 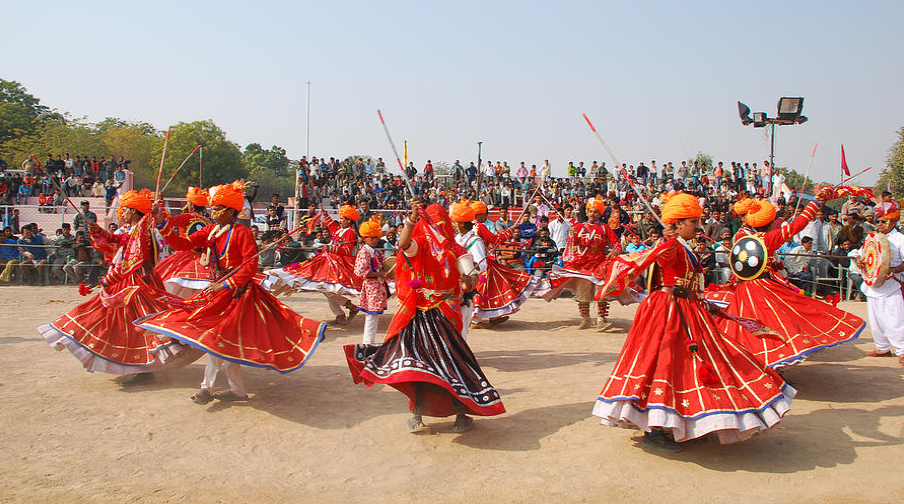 Originated from Bhat tribal community, Kathputli is an ancient dance form in which puppets are used to narrate stories. It is a wonderful dance form because it explains Indian mythology and epics along with the problems happening in the society. Puppeteers use strings to controls the puppets and the performance is accompanied by the music. The highlight of the Kathputli is the way the puppeteer narrates the story in a high voice.

Chang is a peculiar instrument like tambourine; dance performers dance to the fast rhythm of Chang. It is a great dance form which is full of enthusiasm, originated in Shekhawati region. The uniqueness of this dance is men use traditional women attire. It is widely famous during Holi. 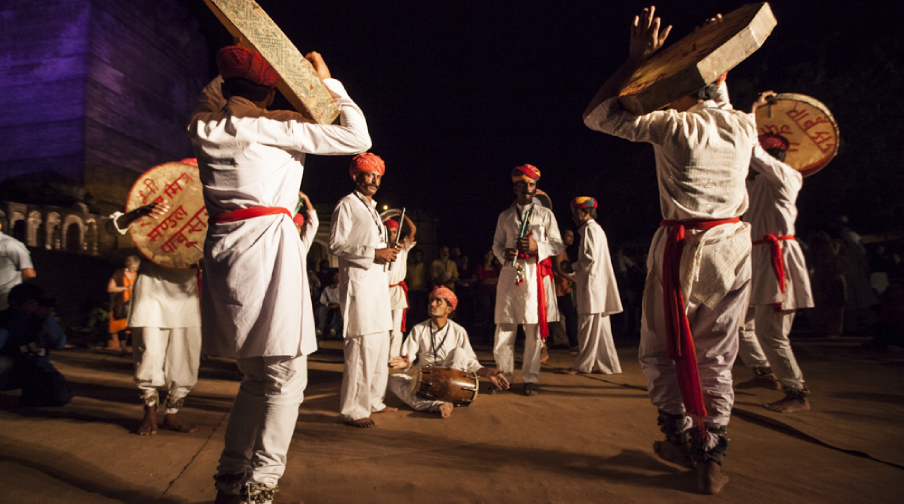 Be it the aesthetic movements or simple steps, the story telling art or story narration, the folk dance styles of Rajasthan has its unique way of touching our soul and capturing our heart with emotions and enthusiasm. 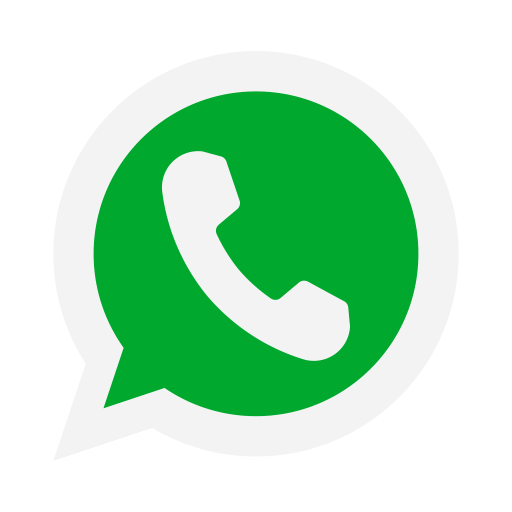